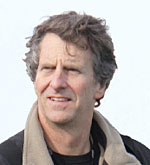 Since 2008, the President’s Development Award has been awarded to an individual for their work or involvement in developing the sport of sailing nationally or internationally.

Stan Honey received the award from World Sailing President, Kim Andersen, as he has continuously looked forward, developing the presentation of the sport on television as well as being one of the most accomplished sailors.

As a sailor, Honey won the Volvo Ocean Race as navigator, set numerous world records and currently navigates on Comanche.

Throughout his career, Honey has used his engineering background to create breakthrough television graphics that have enhanced the production levels of sailing. In 2013, Honey was responsible for creating GPS based imaging for the America’s Cup and continues to refine the technology for wider use. For his efforts, Honey was presented with an Emmy Award in 2013.